“The platform is easy enough to use that you don't need a lot of hand-holding. But when something comes up that you do need some help with, there are people there to support you.”

For people with Celiac disease, the only treatment is a life-long gluten-free diet. The auto-immune disease can’t be treated by medication or cured by surgery. And there are no vaccines to prevent it.

Because so many foods contain gluten, it can be difficult for patients to know what foods are safe at a restaurant or decipher labels on-the-go at the grocery store. And for new patients, instantly and drastically changing their diet after receiving a diagnosis is a huge lifestyle change. 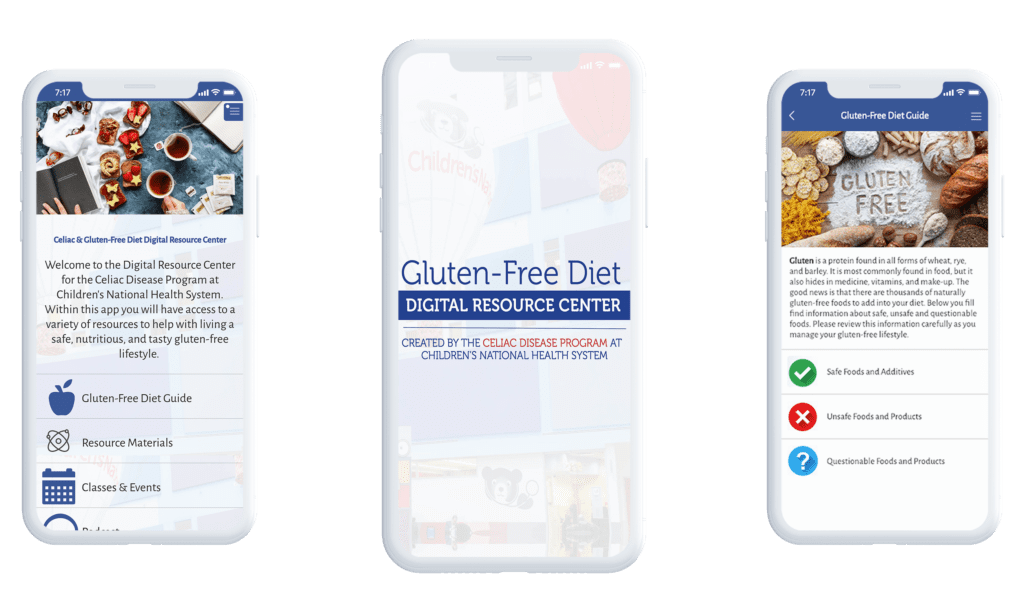 As the education director for the Celiac Disease Program at Children’s National Hospital, Vanessa Weisbrod works with newly diagnosed patients to teach them how to make the required lifestyle changes.

At the Washington, D.C hospital, Vanessa had a library of materials to share. But for patients, carrying around binders stuffed with information was cumbersome and impractical.

Patients wanted the information in one, easy-to-access place. As Vanessa and her team talked to their patients and investigating how to publish the PDFs online, they realized the best way to do that was through an app.

Neither Vanessa or her team had a tech background, so they turned to BuildFire’s professional services team to bring their vision to life.

Vanessa and her team started researching to find an intuitive, easy-to-use platform that allowed them to share a lot of information. They needed a solution that let them put content into a blank template, with multimedia capabilities to move away from posting PDFs.

To educate and engage their patients, the team needed a platform with three critical functions. First, the app needed to support multimedia content like video and podcast streaming. Second, the platform needed to have the ability to build pages from scratch. Third, they needed functionality that would allow patients to see and register for events.

Finding an easy-to-use solution was no simple task for the education team. The three of them researched a myriad of platforms and read countless reviews. Vanessa tapped her husband, social media director for CNN, to help her vet the companies.

Vanessa and her team talked to many platforms and registered for numerous free trials before building their shortlist. Finding an easy-to-use platform with specific functionality and fit their budget as a nonprofit organization knocked many companies out of the running — except BuildFire’s professional plan.

“BuildFire was the only one where I felt like the functionality was easy enough to use and met all of our needs,” Vanessa said.

Exploring a World of Possibilities

As Vanessa started building the app, she and her team started to imagine the exciting possibilities. One idea they had was to create an interactive way for families to learn about gluten-free diets in a fun and engaging way, using virtual flashcards. But they had no idea how to bring these features to life.

“Our team is drawing on napkins what we want the flashcards to look like,” Vanessa said. “I'm sending these pictures to BuildFire, and thinking, 'How do we make this flashy and fun and something the kids are really going to enjoy working with, and how do we make it so there are pictures, video, and audio attached to them?'”

The BuildFire professional services team helped them develop custom functionality on top of the platform, like flashcard decks that contain safe, unsafe, and questionable ingredients. When Children’s National needed a completely custom feature, BuildFire’s team of engineers was ready to build it into their app.

Vanessa said the professional services team at BuildFire has been easy to work with and incredibly responsive. She also credits the BuildFire team with helping her see new possibilities and bring them to life.

BuildFire made building an app easy, Vanessa said. Working together has given her team a tool they can share information and connect with people. If the Children’s National team simply relied on the hospital’s website or hand-outs, the Celiac Disease Program wouldn’t be nearly as cohesive.

“The platform is easy enough to use that you don't need a lot of hand-holding. But when something comes up that you do need some help with, there are people there to support you.”

Helping Children and Families Across the World

Since the app’s initial launch, the response has significantly exceeded the Celiac Disease Program’s goals. Families love the app, and kids especially love the cooking videos.

Today, the app is the first interaction families have with the Celiac Disease Program. As soon as a person receives their diagnosis, Children’s National welcomes them to the program by sending a download link. As patients attend informational classes, instructors demo the app and show them how to access everything they might need when they’re in the grocery store, at a restaurant, or simply at home.

The app also allows parents to directly communicate with Children’s National. Instead of fumbling through searches to find contact information for the hospital, they can open the app and email or call a team on standby 24/7 to answer questions.

“It's a big success in that it has allowed our patients to have everything they need in one place, and makes it really easy for them to get the information that they need,” Vanessa said.

Their app has also allowed Children’s National to help kids and families outside of the Washington, D.C. metro area, and even outside the United States.

In one instance, Vanessa received an email from a Ugandan girl who suspected she had Celiac disease, but couldn’t find a doctor to give her a proper test.

Inspired to help, Vanessa started researching doctors in Uganda. After a week of difficult research, she finally found one who would consider seeing the girl — but had a very narrow appointment window.

By the time Vanessa was able to contact the girl, it was too late. Before Vanessa could help her get another appointment, the girl had gotten a visa to visit Washington, D.C.

Children’s National helped her get the test, and she’s since become a friend and advocate of their program.

“It's been very cool to see how something we started to be a very local tool has turned into this very big and international resource for people,” she said.

Next up for Vanessa is working with BuildFire on two new projects. The first is licensing their app so other hospitals can share Children’s National Hospital’s Celiac content while customizing the look and feel with their hospital branding. The second is building a second app to train schools on managing kids with Celiac.

“I want people to know, don't be afraid of building an app because it sounds hard,” she said. “Because it's way easier than you think it would be.”