Patrick Hardy, the CEO of Disaster Hawk, dreams of a world where anyone can create a custom and specific disaster plan for anything that matters to them. With the powerful combination of education and nearly 15 years of experience in emergency management, Patrick is well-positioned to make that happen.

He got his start in disaster planning responding to Hurricane Katrina and has since earned credentials as a certified emergency manager and certified risk manager. Patrick is one of the few graduates of FEMA’s prestigious Master Exercise Practitioner Program. 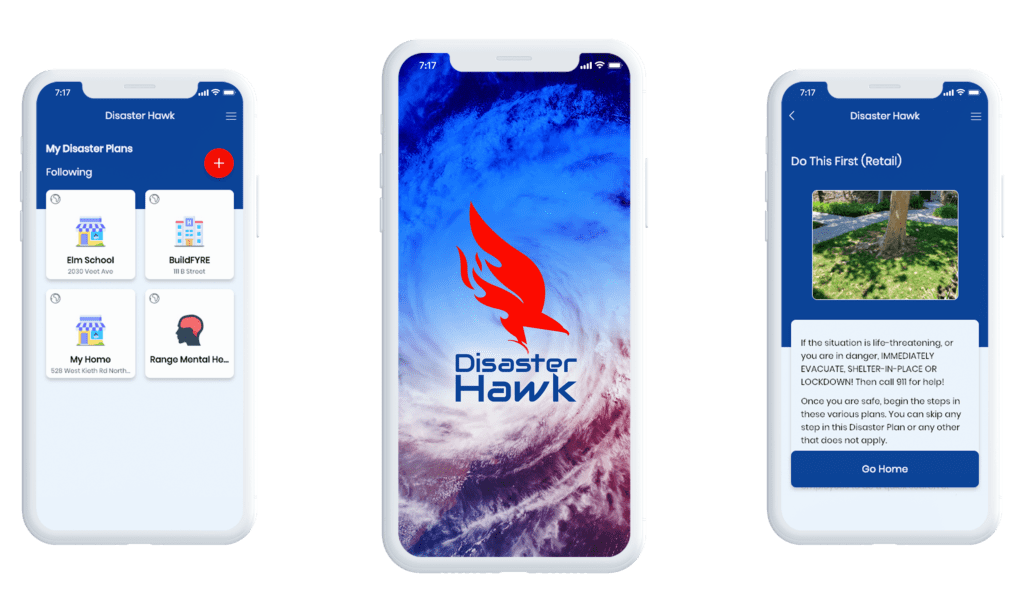 After starting his career as a disaster planner, Patrick found that small businesses and consumers were unable to buy the custom plans he created for larger companies. So Patrick set out to find a better way to make his comprehensive plans accessible to businesses and families.

Before Disaster Hawk, nobody was creating completely custom plans that were accessible to the majority of people, which meant Patrick needed to find the technology to bring his vision to life.

“I decided I was going to do a mobile app,” he said.  “I asked around for investment and I went to lots of places to get investment and nobody would give me any money. Everybody thought the idea was crazy.”

After a long search, he received funding from a group of Native American tribes in Alaska. These tribes owned village corporations who saw the value in Patrick’s idea — and invested in Disaster Hawk.

Before turning to BuildFire’s custom mobile app development service, Patrick got to work. He had no experience building apps, so he read 15 books—cover-to-cover, in a single month—to learn everything he could.

From the language and terminology to the nuances of the technology to current trends, he learned everything he could and hired an app consultant to get him to the finish line.

The purpose of Disaster Hawk’s app is two-fold. First, it allows users to create disaster plans for any situation that matters to them. Second, users must be able to follow plans of others, including family members, workplaces and the businesses they frequent — such as hair salons and doctor’s offices.

Whether it’s preparing for an evacuation, deciding how your family will shelter in place or keeping pets safe in hazardous conditions, Disaster Hawk will provide plans created by expert disaster planners.

Before finding BuildFire, Patrick hired a well-known development firm to create his app. This business had a stellar reputation for working with enterprise-level companies and was a large firm itself. Within three months, the company went bankrupt.

Patrick took what remained of his investment and spoke to many boutique firms. His former platform’s bankruptcy was very public, so there were plenty of companies looking at the collapse as a business opportunity. Former employees were also looking to poach clients.

But Patrick only had a small sliver of his initial investment left, and these boutique firms were too expensive. Disaster Hawk needed to find an innovative and budget-friendly way to create the app.

He found BuildFire and shared his vision for Disaster Hawk’s app on a call with the team.

‘That’s What I’m Looking For’

When compared to the first firm, BuildFire’s process is less confusing, more straightforward and a lot more streamlined, he said. Patrick also appreciates how the team has been so passionate about Disaster Hawk’s mission.

Throughout the process, Patrick was impressed with BuildFire’s communications, creativity and transparency. Regular communication and visibility into the process were critical items on his list. A strong project manager and people who were excited about the project was the icing on the cake.

Patrick had a clear vision for the Disaster Hawk app. For BuildFire, this meant developing complex custom features — a process that required creative problem solving and transparency every step of the way.

When challenges arose creating certain elements of the app, Patrick appreciates that BuildFire was transparent enough to say the first approach wasn’t working and suggest a new course of action. Through the process, the BuildFire team rose to the challenge and was able to build even the most complex features for the app.

A solid knowledge base supported by good customer service is another differentiator for Patrick. When something came up that he didn’t understand, BuildFire’s knowledge base could explain it 95% of the time, he said. The team stepped up to educate him on the other 5% and showed him the course of action.

On the technical side, a smooth user interface and user experience were paramount. Because the custom disaster plans rely on a questionnaire, Disaster Hawk’s value to the user hinges on intuitive design.

Patrick also appreciated how BuildFire took the initiative to suggest a new feature for his app — geofencing technology.

While Disaster Hawk’s app just launched, the future looks promising for Patrick. Beta testers loved how they were able to create their own disaster plans and follow others’ plans.

Before launch, he staged a simulation at his emergency operations center with his team of disaster planners. His team simulated the information that would get pushed from Disaster Hawk to those within an area affected by the disaster.

“That is very powerful,” he said. “In fact, it is so powerful that we're actually in reinvesting in the technology at BuildFire. They're actually going to develop the geofencing technology in a more sophisticated manner for us.”

Though Disaster Hawk’s app is brand-new to the market, Patrick is already looking toward the future. Across the app, he’s incorporated ways for users to provide feedback. He said he invites and encourages all feedback so Disaster Hawk can make the best disaster planning tool that exists.

“We want this to be customer-driven,” he said. “This is their app. This is not my app. This is the population's app. This is small businesses’ apps, and if there's something that they want, they're going to get it.”