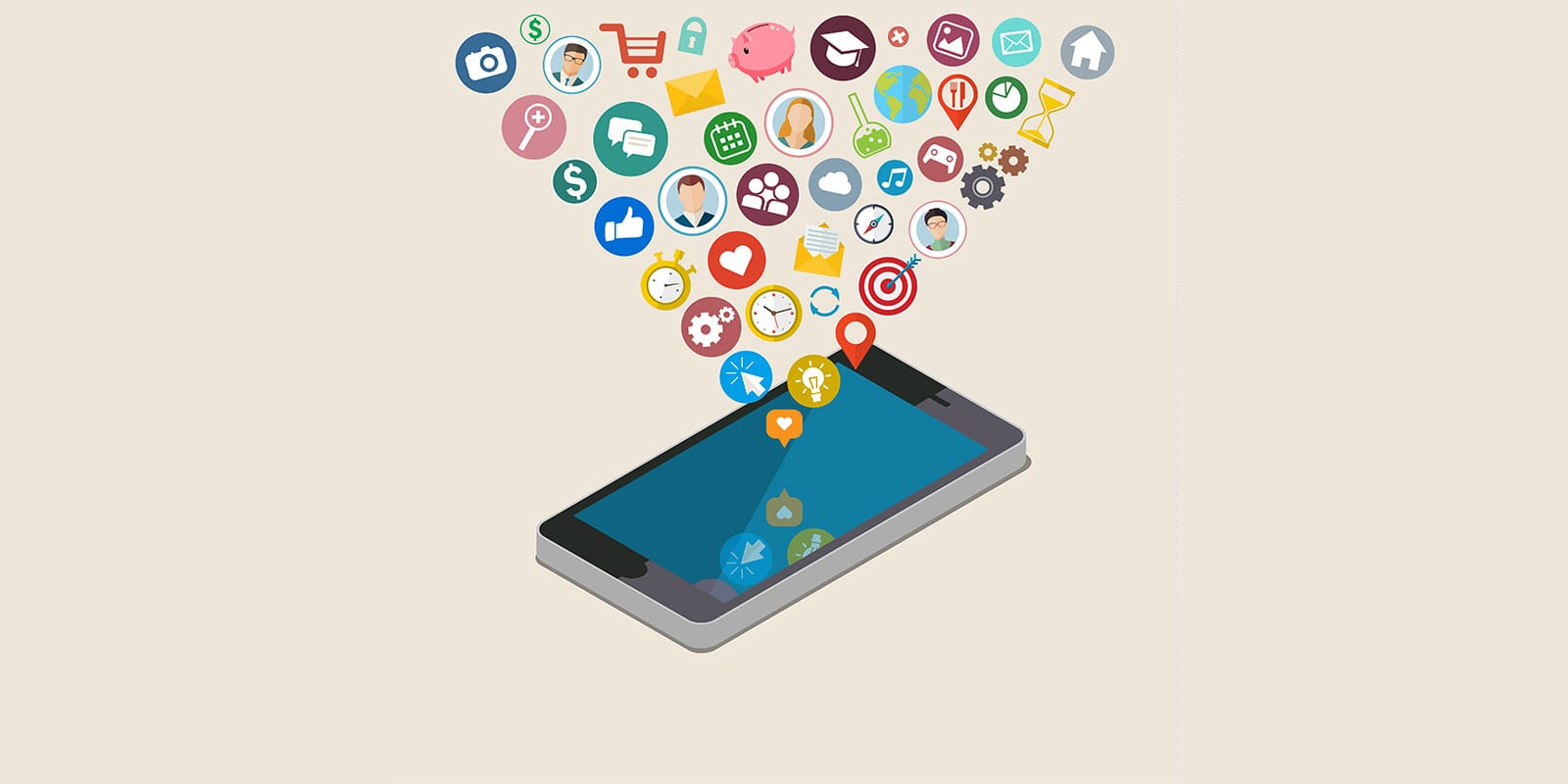 Anyone can come up with an app idea. With so many mobile applications available on the App Store and Google Play Store, it seems like everyone is putting those ideas to use.

But how many of those apps are actually making money?

Before you go through the long and often expensive process of learning how to code and developing an app, you need to sit down and come up with a plan.

Is it worth it build an app for your business?

Depending on which type of app you’re planning to create, the answer may vary. Different types of app categories have more success than others. The most profitable mobile apps cater to the broader mobile app market. Some of the top apps include gaming apps, dating apps, fitness apps, entertainment apps, lifestyle apps and more. These app categories generate revenue on the app stores through a wide range of methods.

First, you’ve got to segment yourself into one of two buckets.

If you fall somewhere within the first option, your app would be used to improve the experience for your existing customers.

As you continue to cater toward the wants and needs of your customer, you’ll see an increased revenue stream.

That’s especially true if you’re an ecommerce business. Look how many mobile shoppers there are in the United States alone.

There’s plenty of room for you to succeed if you think your app would be the next big hit as well.

That may be a more difficult road, but it could potentially be a home run if you’re successful.

You’ve got to understand the breakdown of your revenue.

How will you actually generate a profit?

Those are the most common options for you to choose from.

Another business concept that you’ll need to grasp is the difference between profit and revenue.

It’s possible for your app to have a high revenue without generating any profits.

In fact, you could end up with a net loss.

Here’s what I mean.

Don’t get me wrong, that’s better than being in the red.

But I see this all too often when I’m consulting for different companies. They get so focused in on their revenue, that they don’t realize their profits are so low. 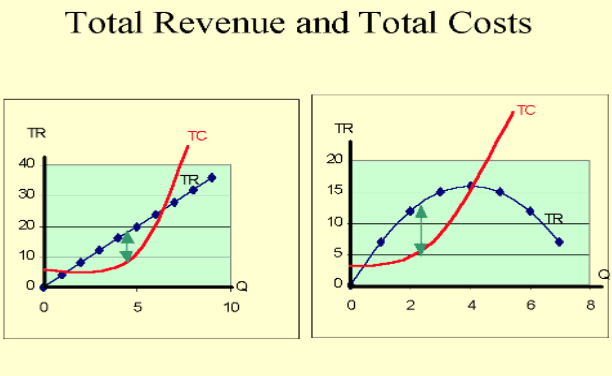 The basic formula to determine profit is by subtracting your total costs from the total revenue.

As an industry expert, I’ll explain to you which types of apps make the most money so your company can be profitable.

Here’s what you need to know.

When in doubt, I always like to follow the path set by other people who were successful.

We can apply that same concept here.

In theory, if you can replicate their strategy, then your app could see similar results.

According to AndroidPIT, these apps have the highest sales revenue across the globe between iOS and Android platforms combined.

What do some of these apps have in common with one another?

Think back to what we discussed earlier for the different ways to generate a profit from your mobile app.

Spotify, Netflix, HBO, and Hulu, all offer subscriptions for their users.

Tinder and Pandora Radio both have premium subscription options that unlock additional features to increase the overall user experience.

The other apps on the list such Sing! Karaoke has various in-app purchase options that range from $0.99 to $99.99 per item.

Even if you have a subscription services or in-app purchases, it doesn’t mean that you need to charge users to download the app. 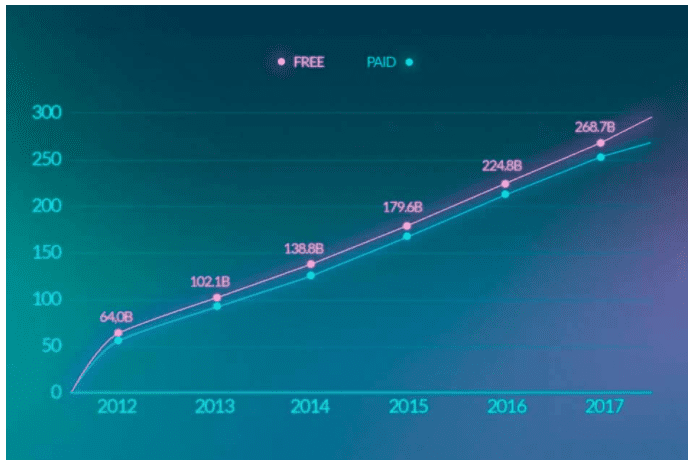 There are more free apps than paid apps available on the market.

In fact, all of the mobile applications that we just saw on that top 10 list are free to download.

30% of time spent playing games occurs while the players are on the toilet.

18% of people in the United States play mobile games while they are at work.

Here’s a look at the top iOS mobile games in the United States based on daily revenue. 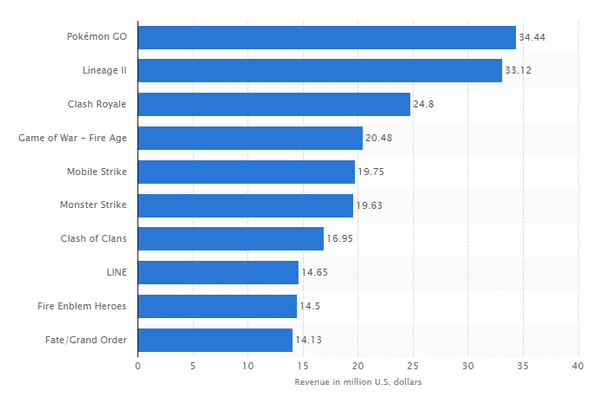 However, these numbers change slightly when you add in Android users and combine that information with data on international revenue.

Overall, these are the top 10 games that have the most revenue.

If you’re planning to develop a game, using this list or the above graphic is a great place to start looking for suggestions.

The main source of revenue for all of these games is in-app purchases.

You can download the games for free and play basic versions.

However, the in-app purchases make the user experience better.

Take an app like Pokemon Go as an example.

In order to get items like Poke balls, lucky eggs, lure modules, incense, or egg incubators, you’ll need to level up after getting certain achievements. 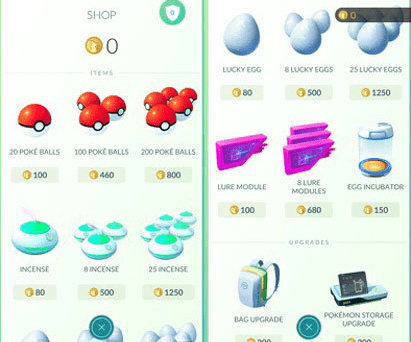 However, users need these items in order to level up faster.

So it’s a double edged sword.

Sure, it’s possible to reach a new level without making a purchase, but buying something makes it so much easier.

They want to get good at the game but have fun at the same time.

It’s frustrating for users if they are stuck on a certain level for too long.

But a simple in-app purchase can speed up that process.

Like most games, Pokemon Go uses a coin system for purchases.

So the game makes money as soon as players buy coins, as opposed to when they purchase an actual item.

Here’s a breakdown of the cost per coin amount for Pokemon Go. 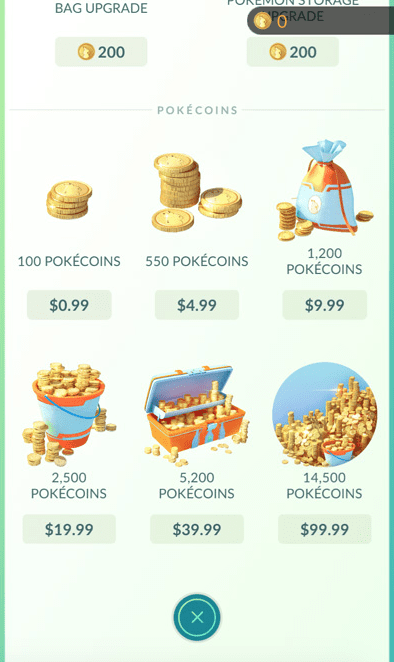 As you can see, it’s enticing for people to purchase additional coins because they get more per each dollar spent.

If you buy 100 coins, it pretty much translates to a penny per coin.

Plus, it’s not like it’s more expensive for the game to operate when users make a purchase.

The gameplay stays the same.

That’s how you can generate higher profits.

Remember when we discussed the difference between revenue and profit?

Well if your revenue increases but your total costs are fixed, it’s a winning recipe.

So take this into consideration if you’re planning to develop a game.

The coin conversion strategy is a winning formula for success.

Breakdown of the individual apps by type

If you have a concept in mind, but you’re not exactly sure what category you fall into, this section will be a helpful read for your planning.

General mobile applications would usually be anything that’s an extension of your company’s brand.

Rather than coming up with a totally new concept, you’re essentially making a better version of your business’s mobile website.

This is ideal if your mobile site has a high bounce rate due to long loading times. 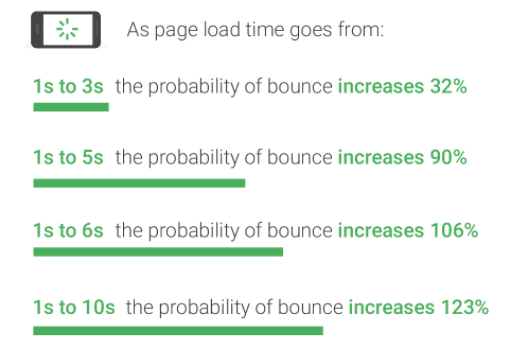 These apps aren’t necessarily group specific, but you narrow the search options based on how you list it in the App Store.

Based on the primary function of your app, Apple makes you assign a category. Profitable app categories include:

These are all examples of general apps.

I think this type of app is pretty self explanatory, but it’s worth mentioning on its own.

Earlier we saw that companies like Pandora Radio and Spotify were both in the top 10 apps with the highest global revenue.

So there’s definitely a market for music lovers.

Spotify has over 75 million paid subscribers.

If you’re planning to develop an app in this category, just understand that it’s highly competitive.

There are already industry giants that are dominating this space.

I’m not trying to discourage you; but if you haven’t started development yet, I’d recommend rethinking your idea unless it’s a completely unique and revolutionary concept.

Some of the most popular ones include:

Again, this is another highly competitive space for new apps.

However, there’s still money to be made.

These apps can help influence users to make online purchases.

Apps that were made to connect users with one another are very successful as well, even if they didn’t crack the top 10 in terms of highest revenue.

Looking back the list we looked at earlier, Netflix, HBO NOW, and Hulu were all in the top 10.

It’s no surprise considering the growing popularity of videos in relation to our entertainment.

According to the Ericsson Mobility Report, video traffic on mobile devices will grow by 50% each year through the year 2022. 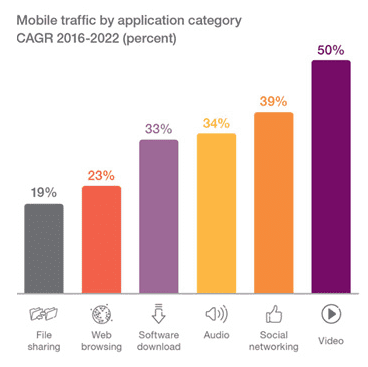 That growth estimate is even higher than both music and social media traffic.

Although I talked about them earlier, you could also group games into the entertainment category.

If you build a game, your app will get labeled as accordingly as the primary category in the App Store.

Some of the graphs we saw contained information for just the United States, while other lists just looked at iOS or Android platforms in isolation.

Even if your company is based in the United States and has a target market that consists of American consumers, you should still be looking at the data for international markets.

In 2016 China accounted for 28.8% of the world’s mobile game installation. They lead the globe in this category.

Furthermore, 2 of the top 10 apps with the highest revenue that we saw earlier are Chinese apps.

Once your app launches in the App Store or Google Play Store, it’s available to everyone across the globe.

You can target mobile users in international territories, such as China.

Now that you know which types of apps make the most money, it’s time to put your idea to the test.

But where do you get started?

If you’ve never done this before, BuildFire can help.

Obviously, I’m a little biased, but I think it’s one of the most simple and user friendly development tools that I’ve seen available on the market.

You can build an app from scratch without ever needing to learn how to code.

It’s also a much more affordable alternative compared to paying someone else to develop your app.

Even if your idea is complex, you can chat with our Pro Services Team if you have any questions. 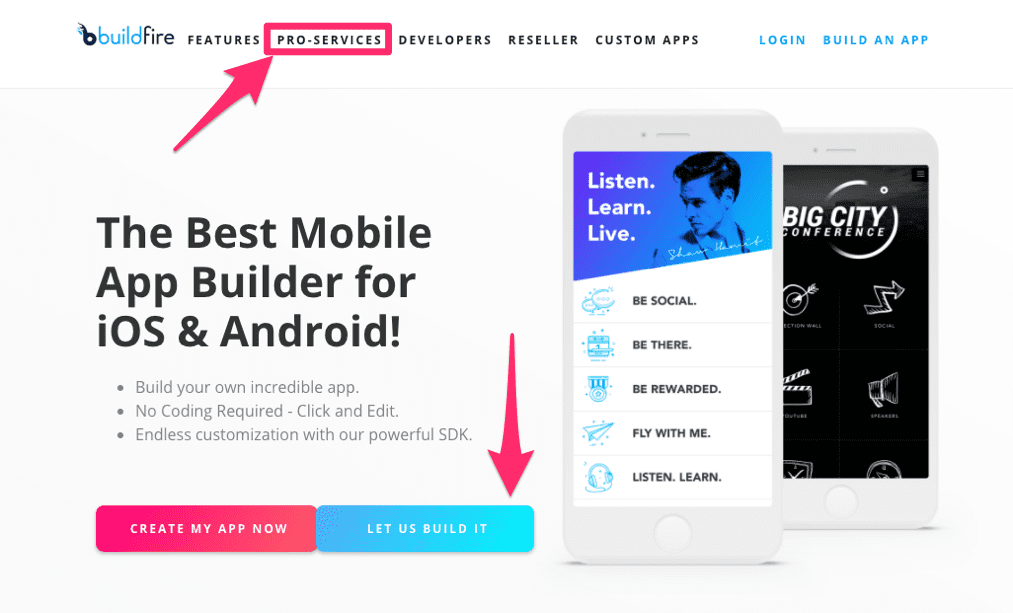 BuildFire also allows you to choose from predesigned templates based on the type of app you’re developing.

This is extremely helpful, especially now that you know which kinds of apps are making the most money.

The templates make it super easy for you to design a layout and set everything up for subscriptions or in-app purchases.

Before you jump head first into app development, make sure that your plan is set up to make money.

Based on everything we’ve just discussed, it’s clear that certain types of apps are more profitable than others.

Just because your app has the potential to generate lots of revenue, it doesn’t mean that you will automatically have high profits.

The best way to increase profits is through in-app purchases and subscriptions.

These keep can keep your costs low and revenue high, which is a method for success.

If you’re planning to create an app for music, follow the lead of companies like Pandora Radio and Spotify.

For those of you attempting to enter the entertainment space, take notes from successful apps such as Hulu, HBO NOW, or Netflix.

Games are a great way to make money too, even if you allow users to download your game for free.

64% of people who play freemium mobile games have made at least one in-app purchase.

Consider international consumers in areas, like China, where mobile games are the most popular in the world. These app revenue statistics will be crucial to your success.

Once you’re ready to get the ball rolling, let BuildFire help you build your app.

What type of app are you launching to generate high profits? Nic is the VP of Sales at BuildFire. He's a proven sales leader with 20+ years of experience in SMB, MM & ENT level sales markets, with more than a decade in the SaaS segment. Nic specializes in leadership, hiring, training, developing, and optimizing growing sales teams.