Getting Started: Coding an App 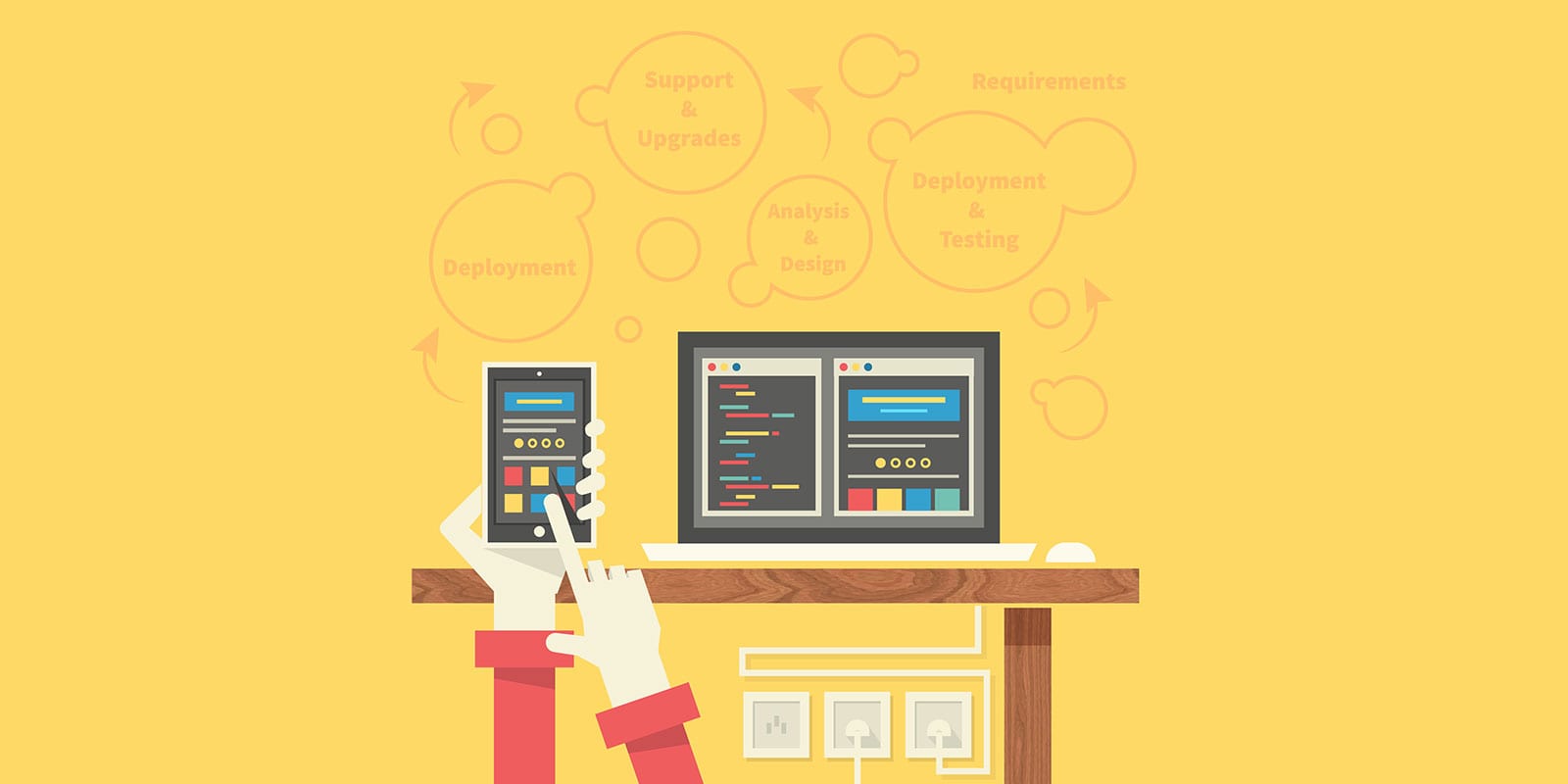 You have a great idea for an app. Now what?

While it might be a great premise, you need to figure out how you’ll get it to market. Building apps takes more than just an idea.

So, what’s the first step in mobile app development? It depends.

Some of you might want to create your first app alone. But you don’t know how to code an app or have any programming skills, for that matter. Is it even possible to create apps if you lack the basics of coding language? Do you need to start with an app for beginners?

If you want to learn how to code an app, it’s going to be hard. But you can definitely learn to code your first app in less than 30 days.

You can use these skills to create your own app and even other apps down the road. Like most things worth learning, the more you dedicate yourself, the faster your results will be.

What is Mobile App Development?

Mobile app development is the process of creating software applications for mobile devices.

The roots of application development stem from traditional software development (like software for computers). But apps for smartphones and tablets are made to utilize the built-in features and hardware of mobile devices. This includes cameras, GPS, Bluetooth, and more.

In terms of programming language, creating an app for users on mobile is different from creating software for computers. With that said, a web development background can make it easier to code a mobile app.

The mobile app industry is booming, and apps are expected to generate over $935 billion in revenue by 2023. The fast-growing mobile trends have made it attractive for businesses and entrepreneurs to build apps for such a wide range of use cases.

Can You Code an App Yourself?

You can definitely code an app yourself. In fact, you can do this without any required professional learning. Lots of people self-teach themselves to code and get a solid foundation in programming from open source projects.

With that said, it all depends on your goal. If you want to learn to code, then going through active development steps, testing a list of functions, and getting your feet wet with a new programming environment is fine.

But if you want to create an app for real users, using an app maker or DIY app builder is the recommended route. These make it possible to build an app without learning Python, C++, or other languages.

App makers make it easier for anyone to create an app from scratch—no coding or app development skills are required.

Coding an App For iOS

iOS apps are for Apple stores.

Xcode is the original IDE (integrated development environment) for iOS and Mac applications. Swift is Apple’s newest programming language, and you can use it to code an iOS app in Xcode. But both of these were developed by Apple, and each one holds the same core fundamentals of coding an app for iOS.

Coding an App For Android

Android development is a completely separate process from iOS development. So if you want to create an app for both platforms, you need to code two apps from scratch (unless you’re using a no-code app maker).

Android has fewer restrictions than Apple for coding. But it’s still very technical. To code an app for Android, you’ll need to use Android Studio—the official IDE for Android development.

The Best Tools To Help You Code an App

Using an app-building tool speeds up the coding process. It lowers the barrier to entry into app development, and beginners won’t need to learn a programming language. Here are some options to consider:

BuildFire is the most powerful app maker for iOS and Android. It doesn’t require any advanced concepts, coding skills, or technical knowledge.

You can use BuildFire to create an app from scratch without writing a single line of code. Everything is managed in a web-based dashboard that’s really easy to use. Just start with a template, add your features, and customize the content.

What makes BuildFire unique compared to other app builders is its limitless functionality. If there’s a custom function you want that isn’t available in the feature marketplace, the BuildFire team can create it for you.

This is technically a hybrid platform, meaning you can create an application using the same language and source code for multiple deployments. But it does have lots of native features (hence the name).

Unlike an app builder, React Native does require coding skills and programming knowledge. You can potentially re-use a block of code or helper functions to speed up the learning process, but you still need to learn how to code.

Xamarin is another open-source application building platform. The company is owned by Microsoft, and it allows developers to leverage the .NET body of functions to create apps for Android, iOS, smart TVs, wearables, and more.

Similar to React Native, Xamarin does require coding skills and programming knowledge. This means that you’ll need to learn the .NET concepts and C# language to create apps using this tool. But you won’t need to create multiple versions of your app for iOS and Android.

Sencha is a cross-platform tool for application design and development. But unlike other tools on this list, Sencha is a better option for web apps as opposed to iOS and Android mobile apps.

6 Basics Steps to Create an App

All app projects follow the same basic path. Beginner developers can follow these app idea tips and steps below to get started. Even a single person with no coding skills can follow this formula and bring their app ideas to life if they’re using the right tools.

1. Coming Up With an Idea

Some of you might already have an app idea. Others might need to brainstorm for app ideas.

Regardless of your situation, you need to come up with the core concepts of your mobile application before you can proceed. A blank project can be intimidating. But moving forward is much easier when you have a path to follow.

These are some good questions to ask yourself during the creative process.

Your app is likely going to enter a competitive market, regardless of the app type or industry. You must take the time to identify a target market and see how you’re going to carve out a market share based on differentiation.

Do you have massive competitors like Amazon and Walmart? Or are you competing with smaller niche apps?

Design mockups and wireframes are crucial to the app-building process.

There are plenty of online graphic design tools you can use for a wireframe. Balsamiq and Figma are two popular options. You can also use tools like Photoshop or Sketch.

The first version of your wireframe can even start as a handwritten doodle on paper.

Prototypes bring your app to life. The purpose of a prototype is to demonstrate the app’s function and design, but without any functional code. So you’re not quite putting learning into practice just yet with any coding skills.

Most prototypes are high-fidelity digital versions of the app that are clickable. This gives you a chance to see the user interfaces before the app actually gets built.

There should be a distinct difference between the wireframes and prototypes. Wireframes are the initial skeleton, while prototypes are meant to show more visual representation.

Building an app with user feedback throughout the development process is crucial for success. You don’t need to wait until the app is done to start your QA process and get actual user feedback.

But before the final deployment, you need to send the app to actual users before the app goes live for download. This is the best way to identify bugs and any UX/UI issues.

It’s in your best interest to have a large enough user testing group, so the user feedback isn’t limited to an isolated area.

The most successful applications have an app marketing plan in place prior to launch. Start promoting the app early, so users are eager to download it once it’s available.

Don’t forget to budget for marketing during the initial planning stages. Your app could be amazing, but it’s useless if nobody knows about it.

There are plenty of ways to market your app. You can run PPC campaigns, focus on app store optimization (ASO), promote on social media, drive traffic to your website, promote via forums—the list goes on and on.

How Long Does it Take to Make an App?

Apps can be built in 30 days, three months, six months, or sometimes longer than a year. It all depends on the type of app and its complexities.

As a beginner, you can use an app maker to get to market quickly without learning a programming language, hiring app developers, or working with app designers.

But if you’re coding an app from scratch on your own, it will take a bit longer. Take advantage of app management tools for your project. This will ensure you’re meeting deadlines and keep everyone on track.

If your app is going to have user profiles, use GPS, have user messaging features, store credit card information, and things like that, then it would take longer to develop compared to a basic calculator app.

Pushing the app to users is the final part of your app development journey. To do this, you need to make it available for download on the Apple App Store and Google Play Store.

With BuildFire, we’ll take care of the publishing process on your behalf. Just let us know when the app is done, and we’ll get it live on both stores.

This is such a valuable service because getting apps published on your own can be tricky for beginners. The Apple App Store and Google Play Store each have different publishing rules and guidelines that must be followed.

Here’s a quick overview of those requirements and nuances:

You can view more information here about publishing on Android Studio.

Generally speaking, Apple’s requirements are stricter than Google. So you must follow the instructions closely or you’ll risk getting rejected. Here are the full App Store Review Guidelines.

Building an app isn’t an overnight process. But app creation is a highly profitable business venture that can benefit existing companies and startups alike.

Learning to code is a valuable skill. But it takes time. Using an app builder is a better alternative if your goal is to launch an app for real users and business purposes. Not only does this speed up the development timeline, but it also saves you money.

Sign up for BuildFire today and start your 14-day free trial—no coding required.